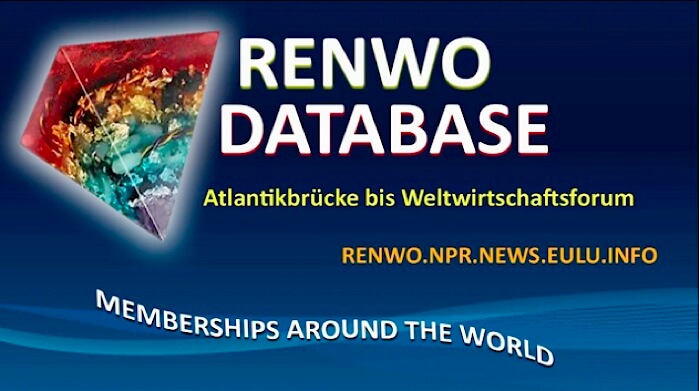 There is a platform in Austria called „Wer liefert Was“. There, interested parties can find out which products and services are available from which provider. Afterwards one knows what one can expect from whom. The Internet side RENWO has similar to offer. Under the motto „The Elite is no longer invisible“, it shows which politicians, entrepreneurs and press representatives hang around in which transatlantic organisations. The portrait of a matted, secretly bundled and consistently undemocratic „elite“ becomes visible.

A visit to the RENWO platform helps to clarify which message one can expect from which publicly known person or how one can classify their statements – depending on the orientation of the think tank or think tanks in which they are or were organized. There you can find out in detail which politicians, journalists and entrepreneurial or industry-related persons are involved in which transatlantic organization, so that you gain an impression of what this person is supposed to bring to the public.

While the commercial platform is operated with considerable funds and of course serves economic purposes, RENWO is a purely private initiative of Werner Nosko, a peace activist from Tyrol who lives in Vienna and who also runs the information website npr.news.eulu.info. He has painstakingly analysed the various publicly accessible information on known and less known think tanks and transatlantic organisations and transferred it into a database form suitable for research purposes.

When asked about his motivation for setting up and operating the platform, Werner Nosko says:

„I myself am interested in finding out whether a politician is involved in any think tank or other transatlantic organization. The search for it was always complex and tedious. I wanted to make that easier for myself and others. Now that I have compiled the information in a database, journalists and people interested in politics can find out who is involved where with just a few clicks and therefore presumably supply the ‚right‘ information.“

The platform is available to all interested parties. The only requirement for use is simple registration – then you can start searching the database. The sources, i.e. the current information from the various organisations on which the database is based, are also available for download as PDF documents. Also the websites of the organizations are linked under a short description, so that one can continue to search directly. Werner Nosko has thus created an extremely useful tool for verifying non-partisanship and independence from certain persons.

The research database does not claim to be complete. On the contrary. It is „work in progress“ and is regularly updated. Werner Nosko is happy to accept references to missing global organisations that should be included or known memberships of publicly relevant persons in order to keep the research platform as up-to-date and comprehensive as possible.

The fact that this is a private project becomes clear in the user interface, which takes some getting used to, but the content leaves hardly anything to be desired. Starting with the American Academy Berlin, Bilderberg, Club of Rome up to World Bank or World Economic Forum: All major organizations are represented.

You can search in over 78,000 data records and if you search for a person, you get, among other things, all organizations in which he or she is involved, the country of origin and the officially confirmed role of the person in the respective organization as well as the period of this activity.

The Green politician Cem Özdemir, for example, has various entries that at least cast doubt on his independence. Information on the donors of the respective organisations is also exciting. Thus one can learn that the Abu Dhabi National Oil Company donates annually between 250,000 and 999,000 US dollars to the Atlantic Council. Completely unselfish, of course.

Renwo‘s motto is really true: The Elite is no longer invisible!